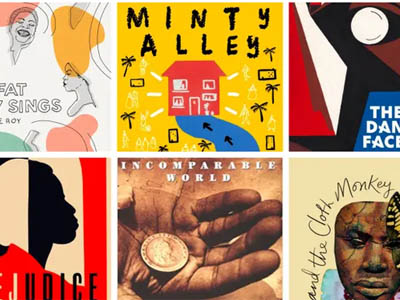 Forgotten black British novels we should all read

BOOKS
Book about racism at UK top school back out in 2022
When a Nigerian-born former pupil wrote a book about racism at Eaton he was banned. Now the book is being re-released.more
BUSINESS
Ethnic minority led businesses contribute £74bn to UK economy
Business run by black, Asian and minority ethnic (BAME) entrepreneurs annually contribute at least £74bn to the UK economy, according to a 2021 report. more
EXCLUSIVE: Building an African Centre in Warsaw
Activist James Omolo is building a centre for Africans in Poland's capital, Warsaw.more
POLITICS
French Guiana produces powerful politicians
France's Justice Minister, Christiane Taubira might be the most prominent politician from French Guiana, but she is not the first.more
COMMUNITY
German locals help refugees
While attacks against refugee homes dominate the headlines, a new movement to aid asylum seekers is taking root in Germany.more
AWARDS
BBC launches award to honour Ghanaian journalist Komla Dumor
The BBC has launched an award in honour of the late Ghanaian broadcaster, Komla Dumor. The 41-year-old journalist died of a suspected heart attack at his London home.more
COMMUNITY
EXCLUSIVE: UK entrepreneur uses tech for success
Entrepreneur Dennis Owusu-Sem is using technology to help young minorities find success.more
AWARDS
VIDEO: 24-year-old Brit media founder to receive MBE
Young entrepreneur and founder of youth broadcasting channel SB.TV Jamal Edwards will be awarded with an MBE from the Queen in the New Year Honours list. He talks about his journey to self-belief in this interviewmore
TRIBUTE
AirAsia jet's French co-pilot 'dreamed' of flying
The sister of Remi Plesel, the French co-pilot of the AirAsia jet believed to have crashed into the sea with 162 people on board, paid tribute on Monday to an "excellent" pilot who had dreamed of flying as a boy.more
COMMUNITY
Street vendor in Spain hands in wallet containing 3,000 euros in cash
A Nigerian man who makes a small living selling packets of tissues on the streets of Sevilla handed in a wallet he found containing over 3,000 euros.more
New future for restaurant named after pioneering UK footballer
A former grill house in Northampton, which has been closed for more than two years, say they are looking forward to 2015 thanks to a £325,000 investment.more
Christmas baby cheer for rescued migrant mother in Italy
A baby born at sea on Christmas Day after his Nigerian mother was plucked from a floundering migrant boat by the Italian navy has been baptised Testimony Salvatore in honour of the medics who delivered him.more
TECHNOLOGY
Mobile app to help Spain's migrants find feet

Migrants in Spain could soon benefit from a European Union-backed program aimed at helping migrants by bringing helpful information to their fingertips via technology.more

'France is in distress. There is a kind of rage out there,' says Christiane Taubira. The country’s black justice minister, 62, is now the most popular left-wing politician in France.more

The anti-immigration PVV is drawing up legislation which would ensure Zwarte Piet, Sinterklaas's (Santa Claus') servant, remains black and that songs remain unmodernised.more

France’s centre-Right parties have grabbed back control of the second house of parliament, the Senate, after three years with a Left majority – but the big talking point for most was the Front National winning two seats for the first time.more

People of color could hold key to UK elections

A radical demographic shift means that Britain's ethnic minority vote may determine the outcome of the 2015 election, according to research.

Somalis in Cardiff, Wales have deep roots in the area, sharing their heritage, is becoming increasingly important to them.

more
COMMUNITY
An African on the beat in Sweden

The riots in Sweden that broke out in May shocked the world. Sweden was the last place most people expected scenes of this kind. More community police officers are needed, a minister says, officers like Togo-born Rissa Seidou who know the area and its residents.

The future site for the United Kingdom's first national Black Heritage Centre in the heart of Brixton, was dedicated in June. The centre will promote a greater understanding and enjoyment of Britain's Black cultural heritage when it opens, officals say.

Economic migrants from Africa have been coming to Portugal for more than 50 years but they have rarely encountered such challenging times.

Singer Eunice Olumide - sweeTs, of the popular hip-hop duo NorthernXposure - like others is working towards a multicultural Scotland.

A work-in-progress documentary Black Russians: The Red Experience, examines the lives of Black American professionals who left their homeland for the Soviet Union in search of an ideal and saw Stalinist Russia as a promised land.

The city of Northampton in the East Midlands region of England is home to the UK's largest concentration of Malawians. Discover their stories here.

For much of the last year, Italian filmmaker Fred Kuwornu has been on the road with his movie "18 Ius Soli" to raise awareness of the law which forces the Italian-born children of immigrants to apply for citizenship at 18.

The reign of Elizabeth I saw the beginning of Britain's first black community. It's a fascinating story for modern Britons.

An EXCLUSIVE interview with UK Member of Parliament, David Lammy, who represents the London area where riots sparked last July. Topics include problems facing people of colour in his area and the possibility of a black Prime Minister in his lifetime.

Rapper and activist Fofo Adom'Megaa aka Rost worked closely with French president Francois Hollande to make sure his party didn't forget about people on the country's housing estates. His exclusive interview here.

The slave trade once made the people of Nantes rich, but the French city covered up its dark history for decades. It recently erected a memorial to the victims in a project believed to be the first of its kind in Europe.

Black and mixed-ethnic Britons are less satisfied with their lives on average than the UK population as a whole, a survey suggests.

Somalis have lived in Britain for hundreds of years. Somali seamen are said to have fought in the battle of Trafalgar. But as a group, they still struggle to find their way.

African immigrants in Greece, like Tanzanian-born Irene Thawe, face a difficult life, one worsened by the country's economic crisis.

This episode of the series examines, the pressure Africans in Europe feel to earn money and send it back home, driving some of them to the dark underworld of drugs and prostitution.

French activist and media personality Rokhaya Diallo, 33, is a new force in the country's media. She is also the creator of Les Indivisibles (The Indivisible), an organization which uses humour to fight racism. Each year it presents its annual Y'a Bon Awards, which highlights the most racist statements of the year.

Northern Ireland's black community is coming into its own. Though modest in numbers, members are building networks to address everything from unemployment to health issues to finding a place in the wider society.

The multicultural neighborhood, the Bijlmermeer in Amsterdam, is not only well known for its 100 plus nationalities but also for its gun battles and high unemployment rate. Now officials and residents hope a recent major overhaul will bring stability and prosperity to the area.

Patras,Greece, is a Port City and major transit point for hundreds of migrants from across Africa and Asia into Europe. Mojahed from Sudan arrived here a few months ago after escaping the violence in his native Darfur. Watch his harrowing story of life on the streets.

In Morroco, thousands of Africans seek to enter Europe literally by foot each year.., Joshua, a young Nigerian has been on the road for more than five years. Find out about his harrowing journey.

When black French businessman Alain Dolium ran as the top candidate for centrist Democratic Movement Party in 2010, he drew comparisons to U.S. President Barack Obama. Though he did not win, Dolium has emerged as a new force in French politics.

Ricardo Lumengo made history on Oct. 21 2007 when he was elected Switzerland's first-ever national parliamentarian of African origin. Since then, the lawyer has been transformed into a prominent public figure in the Alpine country.

Despite recent racial unrest in Italy, African communities continue to forge ties in the ‘bel paese.' Many West Africans are making the multicultural area around Viale Gramsci in Modena, northern Italy home.

The constant fear of being attacked in the street or anywhere has become a way of life among Africans living in Russia - the majority of the attacks are racial motivated. "Street Life Moscow: Strange Land, An African in Russia" examines the lives of those who face the problem.

A CNN profile of Jean Léonard Touadi, the first black member of the Italian parliament.

He's been called the new face of France's Socialist party. Ali Soumaré continues to be a force in politics, running mayor in the Paris suburbs in 2013, after helping to lead his party to victory against the ruling Union for a Popular Movement (UMP) in 2010.

African migrant workers rioted in the Italian town of Rosarno in Calabria, after two of them were shot with airguns. This Médecins Sans Frontières video, shot in Rosarno in December 2009, lifts the curtain on their deplorable living and working conditions.