Members of the black community in Northern Ireland gather during Africa Week 2010 in Belfast to celebrate their cultures and create support networks. 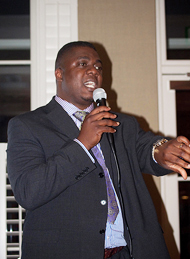 It may be small - around 6,000 according to recent estimates - but Northern Ireland's black community is finding its collective voice and making that voice heard throughout the country. With high concentrations in places like Belfast, Londonderry / Derry, Dungannon and Omagh, Afro-Irish, which include Africans, people from the Caribbean, African Arabs and those with mix heritage, are finding ways to connect with each other and with the larger society.

Among those spearheading the effort is the Afro-Community Support Organisation Northern Ireland (ACSONI) which was created in 2003 in response to a growing number of problems facing the multi-ethnic black community.

A survey of African and Caribbean Northern Irish found "a lack of resources, community support, credible leadership and role models and a viable infrastructure to address specific needs of individuals, especially young people and women from Africa, Afro-Caribbeans and other individuals of African descent," explained ACSONI Programme Manager Alfred Abolarin.

Abolarin's family came to the country from Nigeria more than 20 years ago, so he knows the challenges of being black in majority white Northern Ireland.

Though people of African descent aren't new to the country - the first African immigrants started arriving in Ireland in the 1880s and a student of African origin Prince Adedoyin who attended Queens University Belfast, represented the UK in the 1948 Olympics - media images of African people "usually depict poverty, economic dependency and starvation. All these factors are key drivers to inequality of opportunity, discrimination, poor race relations, and misconceptions about people from the Afro community and the African continent living in Northern Ireland," Abolarin explained.

In February 2010, ACSONI unveiled its three-year plan in the country's official ruling body, the Northern Ireland Assembly. (See video here ) It highlights a list of goals, which are designed to increase the visibility of people of African descent, as well as address disparities in education, employment, health and immigration amongst others.

Near the top of the groups' agenda is monitoring hate crimes. In 2006, the country was branded "the Hate Race Capital of Europe" in a report by the Northern Ireland Council for Ethnic Minorities (NICEM). That year three Nigerian men were forced to flee their Belfast home after a suspicious device was found outside their door. Things are hardly better five years later. According to the Police Service of Nothern Ireland over 700 racist crimes were reported between April 2009 and March 2010.

"ACSONI is very concerned about the high rate of race hate incidents and crime in Northern Ireland. Hate crime is an issue that needs to be addressed collectively by Northern Irish society. We have had and we continue to have incidents of race hate on members of our community and unfortunately, this continues to be people's experiences," Abolarin said.

Fighting racism is becoming even more important as the country has seen an influx of people from Africa and elsewhere over the last decade. " There appears to be a distinct increase in population of people from Nigeria, Zimbabwe, Kenya, Ghana, Sudan, Somalia, South Africa, Jamaica and other Portuguese nationals of African descent," Abolarin said.

Educating white Northern Ireland is the key to combatting racism, ASCONI believes. One of its flagship initiatives is the African/Caribbean Living Heritage project, which brings ethnic minorities and their white neighbors together for informal gatherings. And in 2010, the organization launched Africa Week, a celebration of African and Caribbean culture as well as its European Commission funded project, "Images and Messages of Africa from an African Perspective." The latter is a joint initiative between ACSONI and African organizations in Slovenia and Dublin.

This year's weeklong series of events runs from May 21 to 28 (See calendar for details). Activities range from announcing a DVD project that will document Afro-Irish youth, to the launch of a radio series on Africa and a two-day international conference titled "African Images and their impact on Public perception."

Abolarin believes that Afro-Irish taking charge of their environment will do much to improve race relations in the country. "Africans and black people in Northern Ireland have a responsibility to tell their own stories, celebrate and promote their cultures and achievements. This, in my view will contribute to changing people's perceptions and attitudes towards Africans and Africa as a continent," he said.