Since he was named as the top candidate for the centrist Democratic Movement party for the Ile-de-France region in 2009, Alain Dolium has mantained a presence on France's political stage. 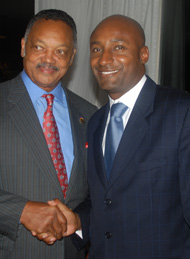 When the centrist Modem (Democratic Movement) party selected black French businessman Alain Dolium as the top candidate in Ile-de-France in regional elections in early 2010, his race drew comparisons to U.S. President Barack Obama. Though he did not win, Dolium has emerged as a new face in French politics. In this exclusive interview, Dolium discusses his political experience and life in France.

Most French people discovered you during the regional elections. But tell us about your life before you entered politics?

Before politics, there were three steps. First of all, I was born in Paris and I moved to Guadeloupe (French West Indies) when I was a few months old. I lived there for four years. People used to say that one's early life brings sensitivity and character and I love that I spent that time in Guadeloupe. My mother is originally from Guadeloupe and my father is Indian from Martinique. After four years there I came back to France. I was raised in Plessis-Robinson, just south of Paris. Two families, including my cousins, lived in a small flat. Then my mother, sister and I moved. I come from a family without a father. I still don't know him very well. The second step was Malakoff, a housing estate close to Paris where I lived as a teenager. Living there gave me a lot of things. I saw the beginning of an urban culture that we used as our neighborhood social media. We found a way of expressing ourselves, which was difficult in mainstream culture. I decided that I wanted to be better educated and make the most of myself. It wasn't easy. Some teachers told me that I didn't have the aptitude for academic studies, that I should do vocational courses. It was amazing because I realised that that kind of advice was directed towards a specific ethnic population from a certain social class. My mother fought for me because some people said I was gifted even while others thought I wasn't. Finally, it was when I listened to advice from an economics teacher that I understood that it was time to focus on developing my intellect. I decided to focus on becoming educated as a way to change my condition. The teacher told me about the difference between Capitalism and Socialism and I began to understand that someone like me could be the primary victim of a certain social order. Later I went to business school in Amiens and then I did HEC (Higher Business Studies) in Montreal where I studied marketing strategy and finances.

Was there a big difference between France and Canada?

In North America you need to specialise whereas in Europe we are more generalists. Professors and students have a more natural relationship there than in France. There is a distance in the way French teachers teach and you can't disagree with them. You can have discussions in North America. It's very interesting. In France, elitism is very strong and you see examples of the class system everywhere. Consequently society is less diversified. Minorities in France know it's hard for them to be accepted in leadership positions.

Was your first job for a French or an American firm?

That's a good question. I had a gifted cousin who went to university at 15. After graduation, she wanted to work for a firm where she could showcase her skills. I'm ashamed to say that because she was a woman and black she couldn't find a job. Someone in the firm actually told her that she only got an interview because they wanted to see a smart monkey. That was in 1983, the same year Yannick Noah won Roland Garros. I saw what happened to my cousin and I wondered if I should work for a French or an English-speaking company. I decided to work for an American company because I think you are judged on what you do. It's not about where you live or your social class. I don't know if I was right but my career really grew quickly. I worked for different companies before starting my own firm where we employ people of different ethnicities.

You're an entrepreneur but you have other activities outside of your work. You mentor school children for example.

When I think about school, I remember both the good and the bad. I met wonderful people and at the same time there was a level of discrimination in the whole experience. I wanted to make my contribution by helping young people. Whatever their origin or social class, young people need information to succeed and face the complexities of the world we live in. For example, some students don't realize that in high school when you take options such as Latin or German, you're more likely to study longer. I want to introduce young people to better managing and understanding the rules of the game. Today education focuses on academic training that benefits people who have a specific social heritage. But France is multicultural and some people do not an equal opportunity to follow the same academic paths. Consequently we have an academic system which is not flexible when it comes to recognizing a person's intelligence and does not appreciate other social legacies. We do not make learning student-centered. If we did, we would teach them how to learn and to take risks and to understand that they operate in a global environment. You see this kind of education in the young American entrepreneur more so than in France. It's different in France we don't give young people leading roles in politics, economy etc ...

You are a member of the Modem (Democrat Movement) with François Bayrou. Why did you choose the centrist party?

Well first of all, everybody was voting for the left and I voted for the left, for the Socialist Party. I voted for them because I believed that the party might have the answers for the social issues we face in France and encourage a better social mix. At the same time, I travel and I meet a lot of people. I'm aware that my ideology and thoughts about the economy do not resonate with the centre left (Socialist Party) or with (left wing) Social Democrats like Jacques Delors or people from the right wing of the Socialist Party. I had a problem with socialist economic thought. This was a fundamental and unchangeable difference, but I voted for the Socialist Party until 2002. Then I started doing social activities with school kids and became more involved with centrist thought. I voted for François Bayrou in 2002 then Chirac because I don't want to see the far right get into power. Afterwards I met with people from the centrist party and tried to get a clear understanding of their position. I also checked into what the Democrats were doing in USA. I eventually decided to become more involved in politics. People in France think that the Modem is neither to the left nor right (liberal or conservative) but is a mix of what is good on both sides. The party seemed ready for the idea of entrepreneurial capitalism so I choose them. In 2010 party activists decided that I should represent the Modem in regional elections in Ile-de-France. I was never asked to base my campaign on diversity, that's why I love this party. I only had to consider its economic model and my attitude about economics to make my choice.

Can you tell us about your first meeting with François Bayrou (leader of the Democratic Movement Party)?

I arrived at François Bayrou's office which was a simple, bright open space, with a well stocked library. I believe that someone's surroundings tell you a lot about the person. We talked a great deal about France. He gave his opinions from his perspective and I gave mine as a child of les banlieues (housing estates). He described his experience of being a farmer's son who came to Paris to study and later develop a political career. We found that we had a lot in common in terms of education and building business. We became friends.

How did you react when Barack Obama became President of the United States?

When Obama became president it was a great moment because I thought I would not see a black president in my lifetime. I first became interested in him when he was a senator, as I often traveled to USA. I found him different - that his approach to issues provided a peaceful and unified version of the USA. It said America is not afraid to be innovative.

You were invited to the Congressional Black Caucus Annual Legislative Weekend in Washington D.C. in 2010. How was it?

It was a great moment. The American Embassy in France reached out to me to participate in several meetings. The French think that the Congressional Black Caucus is just a meeting of Afro-American parliamentary officials would work on ethno-racial community interests. It's more than that. It's an organization which is on the very forefront of innovation in social issues including housing, education and the economy. The event is attended by many people whether they are black, Latino or white. On the sidelines of the Black Caucus, I met famous personalities from the Democratic movement such as the Rev. Jesse Jackson. His vision of the evolution of American society before and after Obama was very interesting as was his call to fight racism against Obama. I also met the president of the NAACP. I talked about the place of minorities in France. I believe that the role of minorities can be addressed from the perspective that problems are the result of the failure of social cohesion because some people forget that France is multicultural.