Bintou Schmill loves boxing and plans to climb to the top of the sport in the next few years. Originally from West Africa, Schmill is also a sports model and singer. 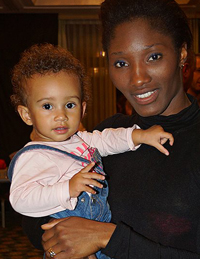 Bintou Schmill with her young daughter. She was back training weeks after giving birth.
German boxer’s on the way to the top

German boxer Bintou Schmill’s future plans are big and bold, just like the results of her fights. As of March 2015, the young mother has been undefeated in 10 fights, with eight knockouts, since she turned professional in 2011.

“I’m planning on doing it all. I want to fight the best in the world,” said Schmill, who in September 2014 became the new European junior welterweight champion (IBF) after a third-round knockout of a Serbian boxer.

All this from someone who donned boxing gloves for the first time in 2007. Back then Schmill, who plans to teach sports and French when she leaves the ring, was studying in Bremen when she met a boxing trainer.

“He said I looked like a boxer; that I moved like a boxer. I wasn’t sure if that was positive or negative,” said Schmill who came to live with her grandmother in Germany from Togo, West Africa, in 1998 when she was 13.

She tried the sport shortly after and was immediately hooked. “ I loved it. If I don’t box, it feels like something is missing,” Schmill explained. Just two months later Schmill was competing and four years after that had turned professional following a strong amateur career.

Along the way, Schmill has had to overcome many challenges, including her family’s initial disapproval of her sport of choice.

“At the beginning my mother and grandmother and brother wanted me to stop it. They said it wasn’t practical. I could be injured. Now they’re always asking when I’m having my next fight,” Schmill said.

And as she is learning to navigate a boxing world in which many female fighters cannot make a living, Schmill is also fighting stereotypes about female boxing. “In Germany, many people think that women can’t fight or show the same techniques, as men. This means that women are often not taken as seriously as men. I wanted to show that women fight like men,” she said.

As a testament to her determination, Schmill is giving boxing a 110 percent commitment. So much so, that she was back in training just three weeks after having her daughter and in the ring three months later. “That’s my greatest sporting achievement so far,” she said. She credits the support of her husband who takes care of their 20-month-old daughter, allowing Schmill to finish her teacher training.

As she powers up the ranks, Schmill has found a balance that allows her to train frequently - around twice a day six weeks before a fight. She is also represented by a management and promotion team, PSP Boxing Promotion that she said is finding her good fights.

With a well-crafted master plan, including a world championship win this year, Schmill is giving herself 10 years to fulfill all her boxing dreams.

In the meantime, she ‘s also having fun with other career options, including sports modeling and singing. Schmill, who is known as “The Voice” in the ring, loved to sing and dance as a child. Now she performs jazz and gospel, the latter with a mass choir project in northern Germany.

It seems that there is no stopping Schmill who embraces each opportunity with both hands.

“When I first came here to Germany, I realized that I had all these opportunities and I could do anything I wanted to and I plan to,” Schmill said.