The Black Archives is an unprecedented documentation of black Dutch history. It currently has five collections with information from the Netherlands, Suriname and beyond. 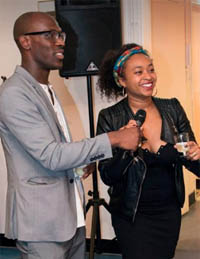 Atop a building housing the Netherland’s oldest migrant organization, the untold stories of black people and movements are slowly being revealed. The Black Archives, a collection of more than 3,000 books, archives and artifacts is shaping the narrative surrounding racism and race issues, slavery and colonization, through the lens of the country’s black population.

Its founders Jessica de Abreu and Mitchell Esajas began the project with a donation in 2015 by Miguel and Thiemo Heilbron of their late father Waldo’s collection. A sociologist at the University of Amsterdam, he had studied post-colonialism, the Trans-Atlantic slave trade and its legacy, racism.

The beginnings were modest, but public interaction was key from the outset. “We started in Amsterdam North in a small space which we got for free and bought some shelves from Ikea and called it a library – called the New Urban Café,” Esajas explained.

The following year, the archives, which are managed by the New Urban Collective, a network of young people, founded by de Abreu and Esajas in 2011, were forced to move because of gentrification. However, they found the ideal home - the headquarters of the Verenging Ons Suriname (the Association of Surinamese People).

The association had its own collections and needed help organizing them. “We made a deal with them…while cleaning up and unpacking the boxes, we found that there was a lot of material, hidden history, a lot of old newspapers, old books, old documents of Surinamese and black self organizations since the 1930s and 40s. We found treasure,” Esajas said.

They discovered information, not just about the Netherlands and its former colony Suriname, but also connections between black people in those countries and the United States and Africa.

One example is the story of Otto and Hermina Huiswoud. Otto was chairman of the Surinamese association from 1954 to 1961, a period in which it played an important role in the Netherland’s growing Surinamese community and in the resistance against racism, colonialism and inequality.

The son of an enslaved African, he left Surinam in 1910 for the Netherlands, but ended up in New York, where he eventually mixed with many of the prominent activists at the time, especially Caribbean Marxists, like George Padmore. The only black cofounder of the Communist Party of America, he was also a part of the early civil rights movement. Meanwhile, his future wife Hermina was also active in various socialist and communist networks.

After the war, the couple migrated to the Netherlands and Otto continued to connect his international contacts with the growing resistance in the Netherlands. Their collection in the Black Archives includes original newspaper articles and magazines from the 50s and 60s about Martin Luther King Jr. and the civil rights movement, signed books by Langston Hughes and letters and telegrams between the association and various international student and emancipation movements.

According to de Abreu, the archives are not just about constructing history, but also about creating identity. She works with volunteers every weekend. “When we open up the boxes we know more about ourselves than we knew ever. Sometimes that can be emotional.”

“I feel obligated to do this, so I can hopefully not only speak about the colonial past, but that racism is a real thing in the Netherlands, that often portrays itself as a liberal or tolerant country.”

The archives is open on Friday and Saturday, from 12pm-6pm, and the team is currently on working to make more material accessible to the public, through a crowd funding campaign.

For information visit The Black Archives