In 2014, Unigwe published Black Messiah, a novel about Olaudah Equiano. She was also selected for the Hay Festival's Africa39 list of 39 Sub-Saharan African writers aged under 40 with potential and talent to define future trends in African literature. 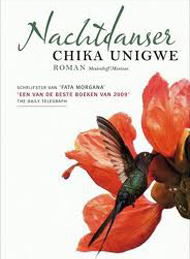 Chika Unigwe, an Afro-Belgian writer born in Nigeria, has published works including novels, short stories and poetry. She has received a number of writing accolades including the 2003 BBC Short Story Competition for her story "Borrowed Smile," a Commonwealth Short Story Award for "Weathered Smiles" and a Flemish literary prize for "De Smaak van Sneeuw"(her first short story in Dutch). Her three novels "De Feniks" (2005), "On Black Sisters' Street" (first released in Dutch under the title "Fata Morgana")(2008) and "Nachtdanser" (2011) have all received critical acclaim in Belgium and around the world. In this interview Unigwe, talks about where she finds inspiration and how living in Belgium has inspired her work.

When did you come to Belgium?

In1995. Right after my degree exams. I lived here until 1999, lived in the US and Canada, and then moved back Belgium. Why did you choose to live in Belgium and particularly in a Flemish area? I met a Flemish guy while at university, we fell in love, married and when he moved back "home," I followed.

What has been your experience as a person of colour, specifically in Belgium and Europe in general?

I'll respond to this by telling you of two experiences I have had here that have stood out for me. The first happened in the 90s. I had two degrees, put my doctoral studies on hold to get a job "in the real world." I went to a job centre in the city where I live, Turhnhout, and told the lady behind the desk that I was looking for a job. She took a look at me, and said, "Ah, yes, we need cleaners. You can start immediately." It had never occurred to me that anyone would assume they "knew" me because of my skin colour. I told her I was looking for a cleaner too and to send one on as soon as she could. Years later, I ran successfully for a city council seat in the same city. That is not to say that things are perfect now, but it means that perhaps there is hope.

How have your experiences and location influenced your writing? Everything I write is driven by the way I experience life, events and so on.

My location influences my writing only in so far as it's made me aware that we live in a world where one's melanin count is a determiner of one's place in society or of what that society is willing to let one have access to. So now I write about issues of racism, and immigration, and loneliness.

When did you know you wanted to write?

When I first came face to face with a writer. I was maybe five or six, and I met Flora Nwapa [a Nigerian writer]. I adored her and wanted to be like her. Where do you find your inspiration to write? From everywhere. I am a shameless eavesdropper; I love listening to the news. I love a good gossip.

Do you have a writing routine?

Sometimes. I find it very difficult to stick to a routine. I really, really should though. As a poet and novelist, what do you find easiest to write? I am not really a poet, at least not anymore. I wrote a lot of poetry in the past, but once I moved to Europe, the Muse disappeared. I find it a lot easier to do fiction. I have a lot of respect and admiration for good poets.

You now have three novels under your belt, which one of them did you find the most difficult to write and why?

Perhaps "On Black Sisters' Street" because it challenged everything I was raised to believe. I also had to learn to rid myself of several prejudices before I could write it. I ultimately came out of it a much better person, I think.

Do you write in any other languages apart from English?

I write in Dutch, but I write mainly in English Do you think the West is open to reading African stories? Definitely. Many more African writers are being published by mainstream commercial publishers in the West. The biggest challenge is writing what your agent, or your editor thinks the West wants to read. It would be brilliant if more good quality African publishers emerge, if we had African agents, African editors.

What are your favourite books?

At the moment my favourite books are "The Museum of Innocence" by Pamuk; "Bad Girl" by Llosa; "Moral Disorder" by Atwood; and Alice Munro's collections of short stories.

What advice do you have for someone who would like to become a published novelist?

Read. Read. Write. What are you working on now? A novel set in the 18th century, which is giving me a very hard time

If you were writing a book about your life what would the title be?

"A Life So Ordinary." I'm crap at thinking up titles.