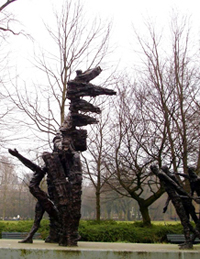 The National Slavery Monument in Oosterparkcommemorates the abolition of slavery.
AMSTERDAM

Amsterdam is commonly viewed as one of Europe's smaller must-see cities. With a population of less than 800,000 and a city center that is densely packed with the charms of canals, cafes, and coffee shops, many visitors are misled to believe the city has little else to offer. But if you listen to the person who tells you Amsterdam can be experienced in just two days, you're likely to miss lots of the city's gems that may not be on the typical tourist map.

The larger cities of the Netherlands, including Amsterdam, Rotterdam, and the Hague, have migrants to thank for the country's rich presence of cultures, languages, religions, and foods. Around 9 percent of the population was born outside of Europe, a national statistic that obviously does not include non-white Dutch families that have lived in the Netherlands for multiple generations. In Amsterdam, you'll meet people from Suriname, the Netherlands Antilles, Morocco, and Ghana, among many others. This diversity can be seen throughout the city. And in some neighborhoods, the majority of residents and business owners have brown skin.

Pay a visit to Amsterdam Oost (East). Here you'll find Dappermarkt, one of Amsterdam's vibrant and more colorful markets for items like food, flowers, and household goods. In the area, you'll find plenty of yummy food options. And the local park, Oosterpark, hosts a national monument commemorating the abolition of slavery, which is worth a visit. And if you want to find most of the city's Black people, head southeast to Amsterdam Zuidoost, also known as the Bijlmer. If not for all of the Dutch language and bicycles (and the occasional geese), you might mistake some of the Bijlmer's busier streets for Brooklyn's Flatbush Avenue.

In any part of Amsterdam you're likely to stumble upon a good find for food, drinks, or entertainment. Here are just a few suggestions of places to enjoy, whether you're in the city for just one day or (ideally) much longer.

African Kitchen
Wisseloord 164B
(neighborhood: Zuidoost)
http://afrikan-kitchen.com
Specializing in West African, mainly Nigerian, cuisine, this place seems to offer comforts of home to local residents in its food and ambiance.

Restaurant Fraîche
Westerstraat 264
(neighborhood: Oud West)
http://www.restaurantfraiche.nl
Two Black, expat chefs, one from the U.S. and one from England, opened this classy spot in 2011. Not only new, it's refreshing, with a weekly-changing menu that's based on what the chefs find in the local markets. The monthly brunch is a rare find in Amsterdam and worth a visit. (reservations are recommended for dinner)

Restaurant Serengeti
Eerste van Swindenstraat 44A
(neighborhood: Oost)
http://www.restaurant-serengeti.nl
A few Ethopian restaurants are scattered throughout the city. This one is a great neighborhood option.

Roopram Roti
Eerste van Swindenstraat 4
(neighborhood: Oost)
This one is on almost everyone's top 2 list for Surinamese roti, especially for those who prefer meat dishes. It helps that it's affordable and fast, in spite of a frequent line.

Toko MC
Polonceaukade 5
(neighborhood: West)
http://www.mconline.nl
They recently launched a new menu with modern, Caribbean-inspired dishes, all of which are likely to impress. And you'll want to stick around after dinner, for it's likely a live dj, performance, party, or all three will be on the agenda at MC Theater.

Live Entertainment/Nighttime
Check schedules for live performances, festivals, and regular parties. At least one of these places will have something to offer.

Bitterzoet
Spuistraat 2-HS
(neighborhood: Centrum)
http://bitterzoet.com
Live concerts and parties that are theme or dj-specific, ranging from jazz to funk to dancehall.

Café de Duivel
Reguliersdwarsstraat 87
(neighborhood: Centrum)
http://www.cafededuivel.nl/
Mainly hip hop, with a preference for the 80s and 90s, and a little bit of soul and funk mixed in - but don't be surprised if they check inside your bag.

MC Theater
Polonceaukade 5
(neighborhood: Oud West)
http://www.mconline.nl
Live performances and parties that are event/dj-specific, but typically something along the lines of hip hop, afrobeat, reggae and/or classic soul.

Paradiso Amsterdam
Weteringschans 6-8
(neighborhood: Centrum)
http://www.paradiso.nl
A preferred concert venue for some of the most popular hip hop, soul and reggae artists. If Erykah Badu, The Roots, and Damian Marley are in town, you'll probably find them here.