Fred Kuwornu with director Spike Lee. The young television producer made a documentary, "Inside Buffalo" about the soldiers portrayed in Lee's film "Miracle at St. Anna." Next he plans to work on a project about race and culture in Italy. 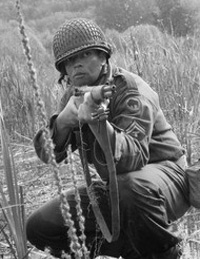 Kuwornu's role as a soldier in Lee's film has spawned a growing career in filmmaking.
Afro-Italian filmmaker turns lens on race

Chance brought Afro-Italian Fred Kuwornu his first major film project- a documentary called "Inside Buffalo," about the relationship between Italian villagers and the African-American soldiers who fought alongside them during World War II.

Working as a stand-in for actor Michael Ealy on Spike Lee's 2008 film, "Miracle at St Anna," Kuwornu said he grew curious about the real men nicknamed the Buffalo Soldiers. "I really wanted to discover who these soldiers of the 92nd division were. I bought books, tried to buy documentaries, found out there was nothing," he said.

A young producer at Italy's largest TV network, RAI 1, Kuwornu set about tracing their story, eventually contacting many of the ex-soldiers themselves. What he found inspired him.The men included Vernon Joseph Baker, a first lieutenant in the army, who is shown weeping in the film as he receives the U.S.'s highest military decoration, the Medal of Honor from U.S. President Bill in 1997.

"These men fought two wars at the same time- one against the Germans in Italy and one back home against racism," said Kuwornu.

Appreciative of the men's contribution to his homeland, Kuwornu used his own money to fund much of the project. "I even sold my couch. I asked academic institutions for funds but no one would give anything in the beginning," he explained.

Three months in, the financial pressure eased a little after donations from several of the Italian towns where the soldiers were stationed, including Barga, (which later erected a memorial to the soldiers).

After screening the critically-acclaimed film throughout the United States, Kuwornu will next turn his attention to 21st Italy which is struggling with its own racial issues. Recent white-black clashes in Rosarno in the south of the country and the interracial riots in Milan's Via Padova point to a growing problem in the nation.

"Italians for the first time are starting to worry, have fear, and produce racist behavior against immigrants, and even more worrying the sons of immigrants," Kuwornu said. Politicians don't help. Some "stoke racial issues, making [white Italians]...go against people of colour," he added.

Kuwornu's new documentary is aimed at his countrymen. Titled "18 lus soli," the name refers to the law that mandates that someone is not Italian if he or she does not have Italian blood. This means that at 18 an Italian-born child of an immigrant has to apply for citizenship, which is not automatically granted.

"You then have to apply for a visa, showing you have a job or your parents can support you. This can kill the dreams of a young person who wants to go to university, for example, because he has to get a job. This creates psychological problems. You ask why your government is treating you like a second class citizen," Kuwornu said.

The law speaks to the way many Italians see people of colour Kuwornu said. "If you board a bus in Rome you will see teenagers of Asian and African descent - if an Italian guy sees them, he will think they are foreigners, but when they start to talk you will see they are even more Italian than him."

Though he has not fully outlined his new documentary, he said the film will examine Italian culture, and will "ask who is Italian?" Kuwornu hopes it will be screened in Italy and in Italian communities around the world.

Thankfully Kuwornu does not have to worry about his own legal status. He is the son of a Ghanaian father and Italian mother, who met when his dad came to Bologna, a city then of only half a dozen blacks, as a student in the late 60s. Kuwornu was born in the early 70s.

Though the only black child in the town, Kuwornu said he did not suffer racism. "They were different times. There was more respect back then. These days you don't know if fighting between Italian and immigrant youngsters is based on lack of respect because of race or something else.

"With a deep commitment to his homeland, Kuwornu, who has a degree in sociology and political science, hopes to use his craft to make a difference. "I am not a politician, but I can use my camera and the little power I received as result of `Inside Buffalo,' to try to influence change in my country," he said.

"Inside Buffalo" is available at www.insidebuffalo.org