Irene Thawe, a legal resident with a Tanzanian passport, has lived in the country for about 18 years. PHOTOS: DANA SAXON 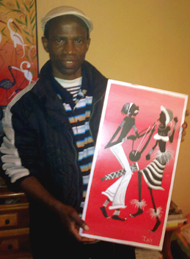 Juma Bakari Klungi, a 41-year-old artist from Tanzania, says he is frequently stopped by police.
EXCLUSIVE: Confronting inequality in Greece

Life for immigrants in Greece is often difficult. But it is especially so for many African migrants who face inequitable treatment in both political policy and everyday life. Recognized by many as unwelcome guests of the Greek state, African people who seek to obtain legal status and steady employment can face insurmountable challenges.

Juma (Jay) Bakari Klungi, a 41-year-old painter from Tanzania, immigrated to Athens in 2011. His daily life has been marred by unemployment and frequent police harassment. Although Klungi waited in line for three months to obtain a pink card, which is a temporary identification that indicates he is in the process of seeking asylum in Greece, he remains without most basic rights. Frequently he is questioned and even arrested, detained for up to a day, while police officers have claimed to verify the validity of his papers. "Greece has some not nice people," Klungi says.

With countless examples of racism and discrimination, he questions the sustainability of his life in Greece. "I don't know why I came. I'm wasting my time here," he says. Finding it impossible to make a living, through his artwork or otherwise, while living in a country that doesn't seem to want him there, Klungi concludes that he will stay in the country for only one more year.

Klungi's experience is not surprising considering the increasingly hostile reception of newcomers in Greece, predominately caused by increased rates of immigration over the last decade. As border policies in other European Union countries have tightened, Greece has become an ideal European entry point for thousands of migrants from the East and South. With hundreds crossing the Evros River each week, many plan to use Greece as a transit point to another country that may offer more personal or economic opportunities. Those who survive the dangerous river crossing, and detention at the border, typically end up traveling to Athens, seeking jobs, legal status, or just a way to get to the next destination. Regardless of their intentions, most are met with prejudicial policies, high rates of unemployment, and blatant racism.

According to Moawia Ahmed, coordinator of the Greek Forum of Migrants and president of the Sudanese Community in Greece, "Africans are the most visible because of their color." Although all foreigners face discrimination, the circumstances of African migrants are extraordinary. "They cannot work in many, many places just because of their color," Ahmed explains. "They are newcomers. They do not know the language. They live in a very bad situation."

Not all African people are newcomers in Greece. Irene Thawe, a legal resident with a Tanzanian passport, has lived in the country for about 18 years. Her daughter, Maria, now in her second year of high school, was born in Greece. Both speak fluent Greek, English, and Swahili. Although she is a well-established, long-term resident, Thawe describes discriminatory policies and frequent examples of racism that increase the challenges of her daily life. She has long suffered taunts on Athens' streets, with chants of "go back to where you came from!" Tensions have only increased since the country's economic crisis.

Thawe worries most about Maria. When she turns 18, the young woman no longer will be a resident under her mother's permit. If she is unable to find employment within six months of her birthday, Maria will be deported to Tanzania, a country that she has only visited. This is because, according to Greek law, Maria is not a Greek citizen. Although she was born in the country, her parents do not have Greek blood, which was formerly a strict requirement for Greek nationality. Instead of a birth certificate, her mother holds only a "receipt," merely an unofficial indication that the birth did, indeed, take place in Greece.

In 2010, second-generation immigrants received a window of hope for equality. A new law was passed to allow children of immigrants to apply for Greek citizenship. Individuals are eligible to be recognized as Greek if they have spent at least six years in Greek schools, or if both parents have been in the country for at least five years. But prolonged waiting periods and stringent requirements, including a birth certificate, make equal rights available to very few. Since the law's passing, fewer than 3,000 people have been granted citizenship. Maria's future in her birthplace, therefore, remains uncertain.

Whether recently arrived or having known no other country, African people living in Greece, among all other immigrants, confront daily struggles for equality. At a time when the country is in the spotlight for its economic crisis, these matters of critical concern remain largely unheard. "People need to know what's going on here," Thawe says. "We're talking about violations of human rights."

Watch BBC interview with immigrants from Africa and the Middle East who want to go home here.