Italian filmmaker Ngalula Beatrice Kabutakapua (left) with Ndiaye Moussoukoro, a Senegalese-born resident of Istanbul, Turkey who offered her story for the film. 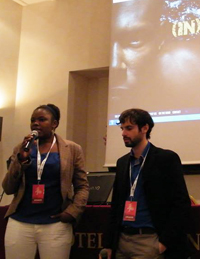 Born in Italy to parents from the Democratic Republic of the Congo (DRC), Ngalula Beatrice Kabutakapua has a vested interest in giving a voice to African migrant communities in Europe and around the world. Since 2012, the foreign correspondent and researcher who has worked with Radio France Internationale and the Guardian in the U.K. and the weekly Italian magazine L’Espresso, has been working on the documentary project (In)Visible Cities with director Gianpaolo Bucci. The 13-episode project explores cities in every continent (in Europe it explores Cardiff, Caserta, Oslo Brussels and Istanbul), and a 55-minute film portraying the first three cities, has been screened in Rome and other Italian towns so far. For up to date news on screenings and live events, readers can check the project’s Facebook page

“I deeply believe that in today’s world we are not allowed to be ignorant about the cultures that surround us,” Kabutakapua says. “Having African roots myself, it’s easier to connect with the people we meet, and I quite like that. I like the fact that I can be the medium that introduces one culture to another.”

Euromight: How has being both Italian and African shaped your identity?

Ngalula Beatrice Kabutakapua: “Shaping identity” is quite an interesting way of seeing it. I think having a double culture is a fantastic resource, if you manage to define who you are and whether you actually need this definition. I think in the society we live in, people are asked to define themselves and that might create discomfort, because what if someone cannot be closed into one or two categories? For me this was very much the case. I went to the Congo and had to hear people saying I wasn’t Congolese. And in Italy people didn’t immediately recognize me as Italian because of the color of my skin, until I opened my mouth and let my Roman accent come out. I have been lucky because since I was little I have met so many different cultures that my mind was already opened to diversity, even if it was inside me. And when I finally realized that I didn’t have to accept categorization but could be as Congolese or Italian as I want, I found richness. I knew the Italian tradition and history and could cook pasta alla carbonara, and I’m a very good cook of Congolese polenta as well. I knew Italian but could also understand Tshiluba, which is spoken in the DRC. I guess researching both cultures also helped as it did meeting people with my same duality. In my case, this dualism is just more evident to bare eyes, but many people suffer from this uncomfortable feeling of having to choose one side.

Ngalula Beatrice Kabutakapua: Initially it was about my Congolese roots. I wanted to explore them better and know more about sub-Saharan Africa. In fact, being born in Italy I was more exposed to the Italian/Western culture throughout my studies and in my personal life--although my parents and relatives have been a great point of reference. At some point, I thought about continuing my studies and getting a PhD in African Studies – which is something I’m still considering for the future. But in truth, I wanted to have first-hand experiences and aimed to make of migration my journalism specialty. (In)visible Cities is now a tool to do that and to give African migrants the chance to speak for themselves and give another side of the story, not only the ones where migrants are poor, thieves and a problem for societies.

Euromight: You attended graduate school in Cardiff. Is that how you became familiar with the sub-Saharan community in Butetown and developed the idea for (In)visible Cities?

Ngalula Beatrice Kabutakapua: I did my MA in International Journalism at Cardiff University, which is slightly out of the city centre. The particularity of Butetown is that from the center of Cardiff you have to pass through it to reach the Bay. The Bay is quite a tourist attraction so many people would pass through Butetown to go there although by taxi and bus. I usually went by walking and noticed every time how peculiar the place was and how many different cultures it contained. I didn’t know Butetown well. I only knew the rumors of the city, which were “it’s a dangerous place.” Then during my studies I briefly worked at the Black and Minorities Ethnic Group Center, which happened to be right in Butetown. I started to go there more often and noticed the urban isolation the place somehow had. On the left side of the main street, Bute Street, there is a high wall on top of which the train passes; and on the other side after lanes of houses there’s a quite busy road. Behind Bute Street is the City Center, which is detached through a series of lanes that lead outside Cardiff; and in front of it is the Bay. It’s like the area is closed between these boundaries. At the beginning I didn’t even think about developing the project in Butetown because I was still affected by the rumors. But when I traveled to Brussels and Oslo, I saw a similar situation. That was in 2012, when I decided to work on a photo-reportage, which later became a documentary when I met Gianpaolo Bucci.

Euromight: How did the project develop and where you get funding?

Ngalula Beatrice Kabutakapua: In terms of researching, I would say I started focusing on African migration in 2011, when finishing my MA at Cardiff University. Then in 2012 I took some pictures in Oslo and started defining some European cities to visit. In November, the project expanded to more cities. So in total I’ve been working on it for a couple of years. And we’ll need more than a couple more to complete it. Regarding the funding, the project started self-funded and still is. We didn't want to wait for funding, but preferred to act right away. Along our path, we managed to find people who believed enough in us to offer their services free of charge, this is the case of HoxtonLab, a London-based company that worked on the music score and sound design. While in Istanbul we also received a small sponsorship from the startup Fiverr, that provides services such as translations, subtitles and small graphic jobs. We found great support in the associations but also had to cut a lot on expenses and do other jobs to continue working on the documentary. We are thinking of also launching a crowd funding campaign some time next year. Obviously it would be ideal to sell what we have to a TV network.

Euromight: How did you meet your partner on the project?

Ngalula Beatrice Kabutakapua: Meeting Gianpaolo Bucci was a blessing, on a professional and personal level. He came to London in September 2012 and his auntie gave him my contact. He mainly came to London to focus more on documentaries than on entertainment, as he had been doing at RAI for seven years. It’s interesting we hadn’t met before, because I’m a good friend of his cousin. We met the first time at a photography event in the Southern part of the UK and haven’t left each other’s side since then.

Euromight: What are the 13 cities you cover in (In)visible Cities? How many episodes have you completed so far and how long will it take to complete all 13 episodes?

Ngalula Beatrice Kabutakapua: We have cities to visit in every continent, because we want to reach as many communities as possible and because we are interested in exploring different ways of adapting, integrating and exchanging among different countries. So far we have 13 cities: the first was Cardiff, which is now concluded, although we are planning to go back there to greet friends we made there and finally screen the documentary in front of its protagonists. The second was Los Angeles, then New York in summer 2013 and Istanbul in spring 2014. We love that we are constantly receiving suggestions and requests for additional cities to add to our research. So in the end we might stretch our schedule and add more cities, but so far we have: Cardiff, Brisbane, Caserta, Oslo, Los Angeles, Brussels, Istanbul, Buenos Aires, Tokyo, Tel Aviv, New York, Cairo and Guangzhou. Since the series is looking for a suitable channel of distribution, we have edited a movie of 55 minutes with scenes from Cardiff, Los Angeles, New York. We have presented it in Italy in the last two months, both in cinemas and schools and are planning to screen it in other part of Europe next spring. After that, we'll continue filming in the other cities chosen.

Euromight: Growing up in Italy, did you experience racism? Is there tension amongst white Italians and Africans living in Italy?

Ngalula Beatrice Kabutakapua: Surprisingly enough, I have never had any major experiences with racism. I was born in a small town near Rome and we might have been the first African family to move there. So I guess that when people see an infant growing up, their sense of fear, which might generate racism, decreases. What I have been most annoyed with were comments from men as I was growing up. At some point there was the idea circulating in Italy that African women were prostitutes, and that’s because of the large traffic of sexual slaves from Nigeria. So I would often notice men overreacting to my presence or being insistent when I was walking in the streets. The interesting thing about Italy--and I really cannot speak for the entire African or Italian population in the country--is that it was okay if an African was in the country and “out of the way” without any ambition. But it was somehow implicit that Africans could not aim for high positions or to be fully part of the society. But in 2013 Italy saw the election of the first black government minister, Cécile Kyenge, who was born in the DRC and has been under fire with comments and threats from the rightist parties. My fear has always been that common people might take the silly comments from these groups as true and shape their thoughts based on those. That’s why I believe projects like (In)Visible Cities are so important to help educate people and let them see another side of the story.

Click here to watch a trailer for the film.