Kat Francois uses humour to examine life as a black person in the UK. The poet is residence at the Stratford East Theatre in East London, has transitioned from spoken word to comedy over the last few years. 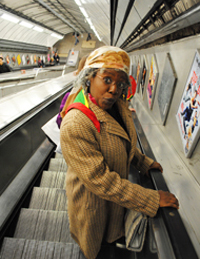 Kat Francois is probably best known as a former world poetry slam champion who ruled the London poetry scene - she was the first person to win a televised poetry slam in the UK - organizing and hosting monthly poetry and music nights. These days though, it is her work in comedy that is gaining her attention in the English capital and beyond.

Francois stumbled into comedy while hosting her poetry show WORD4WORD in the loud and rowdy Royal Stratford East Bar in London's East End. "We had to fight with the noise from the bar, and people who just wanted to come in and have drink and not listen to poets pouring out their hearts. I had to come on as the host and grab the audience's attention, demand quiet and entertain them. Comedy has been a great way to do just that, and it has developed from there," she explains.

Born in the UK to Grenadian parents, Francois has used the genre to help express the experience of being black in society that can sometimes seem alienating for people of colour. "I do use comedy to address some of the imbalances I see, and question the way in which we are treated in society. I poke fun at white culture, and even talk about more serious subjects such as police brutality. I see comedy as a way to get messages concerning many issues across to an audience. My job is to put things in such a way that an audience doesn't just laugh at what I am saying but also walks away, thinking about what I'm saying. Laughter I've found is a very powerful tool," she says.

One of Francois' favorite characters pays homage to her heritage. "Grenadian Granny says a lot of things that I would never say as Kat," she explains.

In addition to her work on the stage, Francois has a deep commitment to giving back to the community that has fostered her talent. She volunteers as youth facilitator at local clubs teaching dance and aerobics and has also worked with young people with physical and learning disabilities, in schools, colleges, in young offender's institutes and homeless hostels.

"I was very lucky to have some amazing mentors as a young person. Youth workers and teachers who encouraged me, believed in me, and pushed me to see the best of myself, who encouraged me not to be limited by my race, my class or the area in which I lived or the stereotypes that others may have had of me. Now I teach poetry, performance and even health education, it never matters to me what I'm teaching as long as I am inspiring the young people that I'm working with. I don't look at it as giving back; I'm just doing something that I've always done" she said.

Francois' nurturing quality also comes out in her poems, which sometimes read like sisterly/motherly advice to young women to be themselves, and to be proud of who they are.

"I am a proud black woman, raised by a woman who taught me to love myself regardless of what society thought about me or my type of beauty. I work with a lot of young women who have very low self-esteem, so my work reflects this, and through my work I try and address some of the issues I feel effect my community, and be a voice for the voiceless," she explained.

She hopes to instill the passion and purpose, which have fueled her thriving career.

"I am a black female; everything I have, I have fought for, this stands me in good stead in the work I do. I think having these so-called obstacles has only succeeded in giving me a fire in my belly and a determination to succeed that might not have been there otherwise."