Moses Leo, Lara-Sophie Milagro, Vanessa Rottenburg in `Home Bittersweet Home.' The ensemble will be performing the play in two venues in February. Check the calendar for details. 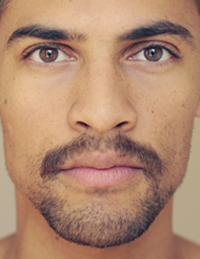 BY NATASHA A. KELLY

"Label Noir" is a group of professional black actors, directors and writers who add a new perspective to the dominant white theater landscape in Germany. Moses Leo, a member of the ensemble, explains how political satire, drama, and stage reading unveil a small piece of federal republican reality.

Label Noir has evolved immensely in the past few years. What have been the most important steps for the company?

The group was founded under the name LiberatioNoir in 2007. Initially we were a group of Afro-Germans who just got together to rehearse. At that time we did not intend to perform in public, but just needed a secure space to try things out. This changed, however, when we were asked to perform in front of an audience - which we did. Slowly but surely we started to focus on producing own pieces and became a "real" theater ensemble - this is why we changed the name to "Label Noir," which is a little catchier.

Since the beginning of 2009 you have been performing the play "Home Bittersweet Home". How was the play produced?

Lara-Sophie Milargo, the head of our ensemble, wrote the script. While studying in London, Lara-Sophie, who is a writer, an actress and a singer, started writing about her experience of everyday racism, which is a collective experience. And we practically took it from there, improvising around the topic. Eventually our first play "Home Bittersweet Home" was created.

What do you associate with the word "home?"

Germany on the one hand and South Africa - in my case - on the other. The thing is, I grew up here, but I have always felt that there is something missing because this is not my complete home-story. Home is not necessarily where you grow up. This is what I found out here in Berlin where I feel very much at home although I did not grow up here. For me home is really a place that you choose, build up on, and where you feel comfortable.

And why do you describe a place you call home as "bittersweet?"

Well, it is because of various experiences you have as a Black German: I grew up here, I work here and I live here. But because I don't look like the white majority, people define me as "the other" and believe that I don't belong here. They give me the feeling that I am not part of this country. The thing is that for many people here in Germany it does not come together that you can be black and German at the same time. My experiences of everyday racism added up to an extent where I didn't want to deal with them on my own anymore. This is where the group came in and why I joined in order to perform and deal with these issues in a creative way.

Daily racism is a very serious issue. All the same irony and humor are integral parts of your play. How does this fit for you?

I like that very much. It is good to produce a tension between a serious topic and bring it across in a humorous way. Of course, the theatrical scenes have been dramatized and written for and performed on stage and therefore they are in a way a little exaggerated, you could say. But the scenes are all inspired by real life experiences. We do this in order to attract the attention of the audience and to feed them such a serious topic so that they can digest it easier. After the laughter the bitter taste of the scene comes and hopefully the audience realizes what it just laughed about. I think humor and irony are a great way to deal with this.

Who is your target group? Do you perform for a black or a white audience? And how do they react?

We perform for everybody! It is important that we address white people in Germany to confront them with the experiences that we have had. And we also address black people and people of colour who can identify with our scenes. We get a lot of positive feedback most of the time because people of colour feel represented, see that their issues are addressed, and know that they are not alone. This is also a good way for them to work on these issues, whereas white people sometimes feel ashamed, embarrassed and caught.

How would you describe the theater landscape in Germany in general?

Here in Germany when you apply for a role you are always considered to be this special type of character. The theater makers believe that you are not that flexible and that they can only use you for certain stereotypic roles such as the foreigner or immigrant which fit mainstream imaginations. They don't want a black Romeo or a black Faust. They see you as very limited in what you can do and therefore think twice or thrice about whether to accept you. It is a lot harder and more difficult to get jobs and satisfying roles as a black actor in Germany.

What does the future hold for Label Noir?

We want to continue in the direction of the second part of our first production "Home Bittersweet Home," where we left the topicof racism to go to more general topics like love, partnership, and relationships. We want to produce more classic German theater in general like Schiller, Goethe or Lessing, but also support writers of the African Diaspora and bring African pieces based on Soyinka and Achebe to the stage because that is missing, I miss it!