Greg "Mr. Gee" Sekweyama takes to the stage to perform. Behind the scenes he is also leading the charge to put Spoken Word on the map. His popular Chill Pill series features the cutting edge of underground poetry. 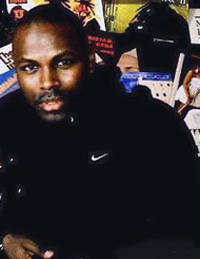 Greg Sekweyama is proving that poetry can not only be a part of everyday life, but popular too.
EXCLUSIVE: The word according to Mr. Gee

There's nothing miserable or lonesome about him, I mean brother man's just ended a run of his radio show (Rhyme and reason on BBC 4), has an album out and has appeared on the big screen with UK actor/comedian Russell Brand! Mr. Gee was the poet laureate on the latter's radio show.

"When I first started, I used to only ever perform in Brixton because I was initially too shy to do a show anywhere else but once I realized that my words had an audience, I took them all over the world," says Mr. Gee, who started as a DJ playing hip hop and funk in clubs before turning to poetry.

"I was told that there was no market for poetry and that I should try to be a rapper, a few years later and I was performing my poems in front of 17,000 people. I've had a fair degree of media success so that makes it easier to get my ideas heard. I've performed all over the U.K. presented shows for the BBC and won awards, starred in a West-End show and even had a cameo in a Hollywood movie with P. Diddy.

"But you always have to remember that I'm still writing and performing poetry (which relies on subtlety) in a world which is entertained by the extreme. So whatever the level of acceptance from the "mainstream," you still have to go back to the humble notepad and pen. Compared to musicians, comedians and actors, poets are always struggling."

Surely having your own radio show and being an international poet has made Mr. Gee's European experience easier than say a struggling artist on a council estate? "Ha, you're assuming that I've left the council estate," he laughs. "One of the reasons that I first got into poetry was to write from the viewpoint of a black man who grew up in London; just trying to make sense of the world. Whatever the subject matter or the level of success, my mental filter still remains the same."

Mr. Gee is inspired by the city he calls home. "Most people think that London is like a Charles Dickens novel or an Austin Powers movie but London has been an international city for hundreds of years." he says "There are a million-and-one untold stories of life, love, joy, pain and passion that are expressed by people who can hail their roots from the four corners of the globe."

He's doing his bit to help get those untold stories out there, promoting fellow wordsmiths in the business. "Being on the radio though, I like to support the UK Poets like: shortMAN, David J, Tuggstar, Raymond Antrobus and Deanna Roger. There is something very unique and overlooked about the poetry scene in Britain, it's like this huge secret underground world which exists just beneath the radar. I truly wish that it could get the recognition that it deserves."

But he hasn't confined himself to radio, Mr. Gee's also wrote and produced his own record "Poetry in the key of Gee."

"My album was more of an experiment than a serious entry into the music business. I wanted to collect many of my early poems and see if I could compose music around them that reflected their tone. I always preferred performing live and accapella than having a band accompanying me. Poetry's true power is in the words and their power to move you, that's why I never embarked on repeating my first album."

"'Poetry in the Key of Gee' opened a lot of doors for me and was a great calling card but it was a labour of love, it made me realise that I'm a poet and not a producer!" he says. We asked him if there were other poets out there he would like to produce?

"I've recently been working closely with a group of younger poets to create a series of nights called ‘Chill Pill.' We've put on some highly successful poetry nights in London and are looking to expand around the country. So if I was ever coaxed back into the recording studio again, it'd be to produce an album with the ‘Chill Pill' collective."

And is there a future for written poetry especially in African and Caribbean cultures where stories are told as opposed to read to kids? "They will always be a need for the written and the spoken, the African and Caribbean communities do display evidence of both (the written format hasn't died completely). My mother brought over crate loads of books from the Caribbean to England, so I was raised reading everything from the classics to comic books. In today's era of the Internet and instantly accessible entertainment, the appeal of written poetry has understandably diminished in all communities, but there will always be an audience for the written word. The same can be said about written poetry, it may not have a readily identifiable fan base, but trust me... it is there."

Speaking of Internet culture there is a Mr. Gee appreciation club on Facebook comprised mainly of young women..."Well I don't really know about having legions of female fans," he laughs, "it's probably due to me working alongside Russell Brand on his radio show. From years of extensive performing, I've been fortunate to share stages with some very big names and attracted quite a lot of attention."

"Poetry taps into the emotional, it connects with something deeper within ourselves and women are generally more intuitive than men. Whether you are writing about love or politics, the poet carves words to try and honestly understand the world around him or her. Also, in a world where we're used to seeing black men talk about endless riches and eternal hedonism, I guess that I must stand out like a sore thumb!"