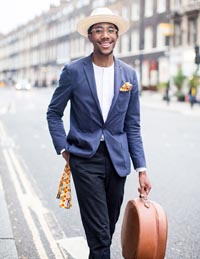 Just call him Mr. Hat, he tells me. And I am happy to oblige. After all, Londoner La Touché proudly lives and breathes the head accessory.

“I plan to become a household name, a brand ambassador, the face of hats worldwide,” the 20-something explains of his love for all things hats.

You may wonder at this passion, in a world where hats though enjoyed, hardly possess the prestige of say 60 years ago, when they were a must-have accessory for any well-dressed person.

Well, it’s in the genes in La Touché’s case.

The magic of the fedora, the trilby and others has inspired him since he first saw his maternal grandfather wearing hats, he says. “The hat affected his character. He was more confident. The hat transformed him. He didn't need to wear it for an occasion or due to the weather, it was just a part of him, as natural to him as wearing a pair of shoes or trousers,” La Touché says.

From time to time, the late patriarch would allow his young grandson to try on his hat. “When you get older I’ll give you one,” his grandfather promised. And at around 19, he did. “It was a black rabbit, fur felt trilby; the hat I always used to try on. It fit me perfectly. We were the same hat size,” he says, smiling.

Though he started with a more formal headpiece, La Touché does not discriminate when it comes to form or function. He has an impressive collection of hats and caps -he doesn’t know how many exactly - but recalls that by 18 he had well over 100 baseball caps alone. Whatever the number he is clear that it’s “not enough.”

Despite this early love, La Touché did not automatically seek out a career in the millinery field. He struggled through uncertainty and lack of clarity, as he sought to find his footing after leaving school, he says. But as he watched his fashion designer sister Lianne creating designs and started accompanying her to fashion shows, La Touché slowly began to realize that “the hat stuff had always been there, right under my nose.”

In 2012, La Touché decided to follow his passion, creating hataboutown , a multi-platform online base /Instagram that he describes as a movement to bring together hat lovers and keep hats alive.

“Hats are part of the fashion world, but unlike shoes, they were rarely celebrated for themselves alone,” he says. Today with thousands of Instagram and pinterest followers celebrating their love of hats, La Touché is on his way to creating the movement he desires.

The site has also reaped rewards for La Touché outside of fans. Working on it led him to influential milliner Keely Hunter, who makes ready-to-wear and bespoke hats.

“We met after I discovered her page on the #hatabouttown feed and she said ‘you’d be great at making hats.’ I didn't think that was what I wanted to do, but later when I was thinking about it I thought that it was a great idea. So I contacted Keeley and she arranged for me to learn the basic skills of hat making in her studio,” La Touché explains.

Hunter also introduced him to top milliners like Stephen Jones. “I will forever be grateful to her for bringing me in,” he says.

Along with this behind-the-scenes skill, La Touché is also increasingly recognised for his work in front of the camera. He makes sure he is always appropriately coiffed in public too. “I demand that I wear a hat when shooting campaigns,” says La Touché, who has been featured in Dr. Martens’ Stand For Something films, you guessed it, wearing a hat.

Determined to do his part in reviving public fondness for hats, La Touché collaborated with the world’s oldest hat makers Lock & Co Hatters during the London Men’s Collection in June. Among his activities: Co-designing a few of its hats which he also styled and taking over the company’s Instagram feed increasing its audience by over 50 percent and transforming its engagement for a more natural and consistent interaction.

In addition, he was also featured in the recent influential London exhibition Return of the RudeBoy at Somerset house, which has since been encapsulated into a beautiful 128-page hard cover book, containing unseen images, essays on Rudeboy heritage and culture and references to the curated spaces at the Somerset House exhibition.

The next few months will be just as exciting for La Touché who will see the efforts of his collaboration with Lock & Co come to fruition with the launch of its AW15 collection later this year. He is also heading to Los Angeles to meet with hat designers and host a hat party called #Hatsonly.

But it won’t stop there. This is a lifelong mission, he insists. He plans to embody the very essence of the accessory. “When people think of hats, I want them to think of me,” La Touché says.