"Oh My Children," which shot in the Chibemba language, and subtitled in English, centers on families ravaged by AIDS and poverty. 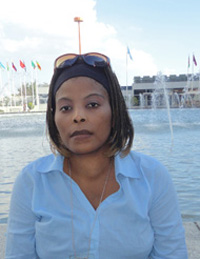 Though aspiring film director Angela Kafwanka Amaichigh has lived in Austria for more than two decades, she turned to her native Zambia when it came time to make her first film.

Frustrated by the problems in her homeland, Amaichigh new movie "Oh My Children" focuses on two of its greatest hardships - AIDS and poverty.

Titled "Owe Abana Bandi" in the Chibemba language, and subtitled in English, the film centers on families ravaged by both. She hopes the film will help bring about AIDS awareness and encourage her countrymen to "come to the table to discuss issues," despite the strict cultural norms that have prevented many Zambian families from doing so.

A mother of three, who works as a timber trader in Vienna, Amaichigh's inspiration came from a story of seven siblings who lost both parents at a young age. "The oldest [at] 14-years-old was left to [care] after her brothers and sisters," she explained. Amaichigh, who is self-taught filmmaker, also financed the project herself.

Back in Europe, Amaichigh said Africans face a host of other problems. "We have mixed opinions where life in Austria is concerned. It's difficult to find a place to stay as an African or black person. Some complain about certain difficulties they face; others complain about the kind of treatment they get when they go to some offices and work places."

Even though many of them feel unwelcome not all have been harshly treated she said. Some have embraced the joy of feeling free and recognized as Austrians. This means, receiving help from natives and enjoying benefits their countries of origin failed to provide.

Below is a Q&A with Amaichigh about her film.

Euromight.com: What was your biggest fear before starting "Oh My Children?"

Amaichigh: I didn´t know how the audience was going to receive the message that I was trying to convey to them. I prayed that my message was not misunderstood or bring more grief to those who are already devastated by HIV/AIDS.

Euromight.com: Where did you get the idea for the script? Did you collaborate with anyone?

Amaichigh: I did not collaborate with anyone. One day I sat on a mat under a tree and looking at my own children, the picture of different situations of many families came before me. I took a paper and a pen and started writing. I was amazed to find out that the flow of the story was not a problem. It was not professional but it helped.

Euromight.com: In the film, the dialogue between the characters is often intensively emotional, what were the challenges of creating the dialogue?

Amaichigh: Some of the actors themselves were victims. They blended themselves into the characters and brought out their emotions.

Euromight.com: What led you to film the movie the way you did? Where there certain scenes you envisioned (knowing already how you wanted them to be filmed) when writing the screenplay?

Amaichigh: My experiences as a child and my desire to see people make better choices led me to do the film the way it is. Usually, I envisioned the scenes in my mind although sometimes it wasn´t the same in reality. Often the actors became too emotional and slightly changed the dialogue.

Euromight.com: How did you go about choosing locations, casting actors and balancing traveling between Zambia and Austria.

Euromight.com: Setting goals and measuring those goals in a meaning full way is very difficult in any industry. Please share an example of a difficult time you faced while making the movie and how you approached that hardship.

Amaichigh: There was a time when the location owner demanded more money despite agreements we made. Secondly, some actors didn´t come regularly because their parents forbade them to. For a woman to do a man´s job was a taboo, I was considered someone without moral standards. I can confess that some scenes were short in a remote village and I used locals for the job. However, I visited their parents and discussed with them the importance of making that film. In the end, they acknowledged my devotion and the work went on.

Euromight.com: What was your favorite part of the process in making "Oh My Children?

Amaichigh: The process of travelling between places of acting delighted me. Coming together as a group and having fun with the actors made me have a personal relationship with them.