Artist Pauline Marcelle moved to Vienna as a youngster but is still deeply inspired by her Caribbean roots. 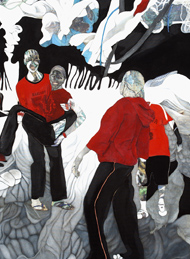 "I am a Caribbean person living in Europe. I feel strongly Dominican, even very patriotic," said Marcelle who moved to the country to study at the University for Applied and Contemporary Arts in Vienna as a youngster.

At that time Marcelle was only one of a handful of blacks in the city. Her early experience was largely positive," she recalls. "I was the only black student at my university and at that time when there were few blacks in the city, people were curious about me. We functioned well as a master class and I experienced no racism within the art world rather patriotism. As in every country and city where there are various ethnic groups, stereotyping will be amidst our environment."

These days, despite an increasing population blacks have their own challenges to address, Marcelle says.

"I believe stereotyping has put stumbling blocks in our paths and we blacks need to cooperate and being fair with each other so we do not become targets for other ethnic groups. The majority of Austrians assume that all blacks have nationalities of African countries and coming from the Caribbean is farfetched and exotic."

With a family and thus a solid base in Austria, Marcelle lives between Europe and Dominica, while also traveling the world for her art. In 2010, for example, she completed a four-month residency in Johannesburg, South Africa, while the following year her work was featured in a World Bank exhibition and at the Art Museum of the Americas in Washington, DC.

Marcelle says her work "addresses mainly themes in a black context with the human figuratives mainly being black or black related." One project, for example, took her to Ghana where she was inspired to create the "Bend Down Boutique" series. The work is based on photographs of the mounds of clothing, which hug the country's coastlines - the result of donations from western aid organisations, which end up in local markets. The discarded items are "ocean formed sculptural bodies of sea washed debris on the beach," Marcelle explains.

With a diverse cultural experience, Marcelle also spent time in Brooklyn, NY; the artist still pulls heavily on her Caribbean roots, mixing them with other forms of inspiration along the way. "[Dominica] is my biggest source of inspiration, feeding me with ever changing and ever recurring images, infusing my bodies of works which gives me energy to express myself through and within colour and composition but artists like Jean Michel Basquiat, Vincent van Gogh, Francis Bacon, Chris Offili, Bruce Nauman and Salvador Dali have contributed to the vast spectrum of my creativity," she says.