Omolo hosts a weekly radio show "Africa Review" at IMIradio, where he tackle socio-economic and political issues in the continent. The focus is mainly on positive issues. 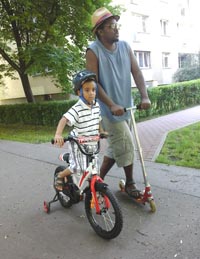 Omolo with his five-year-old son Jason.
Building an African Centre in Warsaw

In Poland’s capital city, Warsaw, people of African descent will soon have a new home away from home. The African Centre will be a welcome addition for the city’s more than a 1,000 residents from Africa.

The brainchild of James Omolo, founder of Afryka Connect Foundation, the centre will create ”a new ‘heart’ for Africa and provide the community with a vibrant, connected and attractive precinct integrating community services and social activities,” he says.

Omolo is currently in the thick of fundraising, and hopes to raise the 14,000 euros it will take to build the centre by Sept. 30th 2016. In addition to traditional means such as government and foundation support, he is seeking donations from individuals.

For Omolo, a married father of two who came to Warsaw in 2006 from Kenya to study for a Master’s in International Relations, the centre is vital to the well being of the city’s black community, including his own family. There are few places to gather apart from a few African restaurants or churches, he says. “Africans do not have a conducive social place where they could feel at home. The centre will provide a ‘little Africa’ in Warsaw.”

Poland is a largely homogenous country. Around 5,000 Africans live in this nation of 39 million. And though two Africans – John Abraham Godson (2010-15) and Killion Munyama (2011-present) – have served in Poland’s parliament, the majority of natives do not welcome immigrants of color. According to a 2013 study by the Centre for Research on Prejudice at Warsaw University, 69 percent of Poles do not want non-white people living in their country.

Among the centre's offerings will be after-school programs, while a variety of workshops, training and seminars will help to support community development and intercultural exchange. There will also be assistance for mixed families.

In addition, it will provide much needed psychological counseling for victims of hate crime, domestic abuse and other discriminatory related issues, Omolo says.

In Poland, there are no statics on hate crimes, nor laws governing them. Attacks on Africans, which generally occur at night, on the streets and in buses, usually go unreported due to mistrust of the police among other reasons, he explains.

The centre is an outgrowth of the not-for-profit Afryka Connect Omolo created in 2012, to help bridge cultural, educational and economic gaps between Poland and Africa.

Over the last three years, it has held 20 cultural events, seminars, workshops; encouraging education exchange programs and continues to act as an information center.

“Afryka connect foundation is positioned like a facilitator to bridge the gap between Poland and Africa by providing a platform whereby both the citizens would like to right every wrong by being drivers of change,” Omolo says.