Rokhaya Diallo and members of Les Indivisibles name the most racist statements of the year at the annual Y'a Bon Awards. 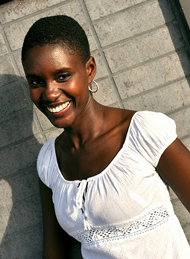 French activist, writer and television and radio commentator Rokhaya Diallo, 33, is a new force in the country's media. The author of the recently released book "Racisme Mode D'emploi" (A Racism User Guide), Diallo created Les Indivisibles (The Indivisible), an organization which uses humour to fight racism. On May 23, the organization will present its annual Y'a Bon Awards, which highlights the most racist statements of the year.

Tell us about your background

I studied law and then I went to business school where I studied mass communications. I was interested in audiovisual production. I love animation and worked for Disney France and for (cartoonist) Johan Sfar. Now I have my own production company and have some TV and radio projects coming out soon. My activist background started back when I was an adviser for local youth for the city of La Courneuve (in the suburb of Paris) in 2001. I joined the group by chance when it was first created. The city said it would give me a scholarship for business school, but in exchange I would have to work for its youth council. Eventually I became president. At the same time I was involved with feminist issues and the anti-globalization movement. When I saw the way the media discussed the riots (in 2005) and the issue of the burqa, I became interested in why people do not challenge dominant media reporting. So, together with a group of friends I created "Les Indivisibles" (The Indivisible). We wanted to fight racism in the media using humor and irony; respond to racist comments and reinforce the fact that we were French too. Since I had worked in the animation industry, we decided to create a website with cartoons. We talked about the racism we faced in everyday life and challenged France's debate on national identity. Things really picked up after we were featured in the newspaper. I started appearing in different media and Canal Plus (TV) and RTL (radio) asked me to be a commentator.

How many people are in Les Indivisibles?

There are around 200 members and a council of six. Ten people run the association. We create cartoons and speak in schools, and prisons. We write articles for our website and have created a ceremony (2009) called the Y'a Bon Awards, where we name the most racist statements of the year. The next ceremony will be May 23rd. Right now we are working on a cartoon series for national TV. It's called "Etoi t koi" and is co-produced with a young company from the suburbs, DACP (De l'Autre Côté du Periph).

You were living in La Courneuve when the riots broke out in 2005. What is your view of what happened?

I was shocked by the way politicians spoke about the city. Before the riots, Nicolas Sarkozy (the French President was the interior minister at the time) came to La Courneuve and said he wanted to "Nettoyer les cités au karcher." (‘Clean out the area with a Karcher' - a well-known high-pressure water cleaner). Later he came back and I was asked to help arrange a meeting with young people, but I refused because I didn't want them to be associated with Nicolas Sarkozy. Later, he used the term "hoodlum" in Argenteuil (a suburb of Paris). I knew then that something was really wrong. During the riots I focused on the way the media was reporting them. I remember watching the debates on television. I discovered Eric Zemmour (a conservative journalist and TV commentator). I found what he said racist but nobody seemed to be able to stop him. And then there were Alain Finkelkraut's (a French-Jewish philosopher) comments about `Islamized' suburbs and prominent historian Helene Carrère D' Encausse who blamed the riots on polygamous Africans. Only a few people responded to them and this is one of the reasons why I created Les Indivisibles. The riots provided a credible reason for some people to become Islamophobic. I believed we needed to balance the debate. I never thought I would become a commentator, challenging the views espoused by people who I consider harmful.

How have politicians reacted to the Y'a Bon Awards?

The first time we had the Y'a Bon Awards we did a press conference at the French parliament. A French Socialist deputy helped us to find a place, though the party was not involved. Politician Eric Raoult (who won in 2010) did not understand why he was chosen because he said he had always fought for freedom. We also chose Eric Zemmour who said he thought the ceremony was ridiculous. We invited each nominee to come and explain their points of view but none came.

Did you have any prominent personalities among your judges?

What do you do on TV and radio?

I work for I-Tele, which is owned by the Canal Plus group. In the morning I'm on I -Télé, and on Wednesday night I'm on Canal Plus. Then I do RTL radio on Sunday morning where I take part in debates. I also have a column called "Life Elsewhere." My topics include education, the environment, the black Caucus, foreign policies, culture etc. On I-Télé I chose topics from the news. On RTL, I'm the only black journalist debating several other reporters. We discuss everything. Right now with the debates about Islam, I can happily say what I think. If I were alone at home listening to the show I would be upset.

Journalist Eric Zemmour works for I-Télé and RTL. How do you feel about his working for the same organisations as you?

I don't sleep well knowing that time is being given to a racist person. What disgusts me the most is that I pay for France Television and I don't want people to insult me. RTL and I-Télé are private but France Television is national and owned by the French state. It's a public service that must embody France's values - Liberty, Equality and Fraternity. We shouldn't have to listen to someone who has been convicted of inciting racial discrimination. For media like RTL, I believe they think they're fine because I'm there. They say to themselves, ‘we are not racist, we have Rokhaya.' I think Mr. Eric Zemmour is being used because many people, including journalists, think like him.

Are you connected with the leftist Socialist Party?

I'm not a Socialist Party member. I feel more like a leftist though. I have spoken at Socialist Party conferences and gotten booed. I told them Nicolas Sarkozy was the first to president to give blacks and Arabs ministerial level positions. We never used to see them on the cover of our news magazines, but both Rama Yade (the former Senegalese-born Secretary of State) and Rachida Dati (the former Minister of Justice who is of North African origin) have since made covers. It's good for the next generation to see different people; to see that they could be a government minister and not only a football player or rapper.