Somalis in Wales, many of them from Cardiff's Butetown, celebrated their heritage at a festival at the National Theatre Wales in March. 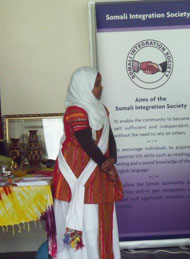 The Somali Integration Society promotes independance and self-reliance for the community.
EXCLUSIVE: Somalis feel at home in Cardiff, Wales

The Welsh capital has been long known for its multiculturalism and that's not surprising, given its role in world trade routes. Ethnic minorities make up nearly 10 percent of the population. And the Somali community is one with very deep roots.

"We know the first Somali came to Cardiff in the 1800s," says Abdi Hassan, community liaison manager at the Somali Integration Society (SIS). "Many came over as sailors when Somaliland was a British colony."

The community grew slowly until the Somali civil war started in 1991. This saw numbers skyrocket. Many have since settled in the suburbs of Grangetown and Butetown around Cardiff city centre. Hassan himself sought asylum in 2001, "I went about the process of learning English, working, going through the system." He is now studying law whilst volunteering at SIS.

The organization, which works to promote independence and self-reliance amongst Somalis, is one of many in the area. The Somali Youth Association, run by Saeed Soleman is another. According to Soleman "Somalis are the lowest achieving amongst all ethnic minorities in Cardiff," the club is a crucial social scene for the youth. With a mission of supporting "young people to reach their aspirations," the association uses sport - organising and participating in events worldwide to help motivate local youth.

While women are visible, men interact more outside the home. At the local Somali teashop men from all generations gather to discuss what's wrong with the world. It's a hive of activity. An elderly gentleman with a short, henna-died beard and piercing blue eyes makes and serves the tea, jumping in and out of the conversation as he goes. His warm smile fades at first sight of a camera, "I don't want my picture taken.". He isn't the only one. Pictures to some in the Islamic community are ‘haram' or forbidden.

Islam is an important cornerstone of the Somali community. The mosque is always full during Friday prayer. People stick around afterwards and chat. It's a weekly ritual, and especially for the elders, it's a way to keep up to date with the goings on in the community.

Near the Somali mosque is a retirement home for elderly Somali males. Many of the residents are former seamen. One resident is Mohamed Farah, a softly spoken man, who came to the Cardiff in 1961. Looking for a better life, he worked mainly in factories making clothes and basic electronics, before becoming a seaman in 1969. With the help of a translator he says he likes where he lives, "it's close to the mosque, and it's in the heart of the community. The facilities are good enough for us elders who have a slower pace of life."

The difference between young and older Somalis is more than simply pace. A clash between traditional and modern ways of life have caused strains in the community recently. Hassan says "the intergenerational gaps between the previous generations and the current generation" is the biggest issue faced by the Somali youth today.

"The key is to find the right balance," according to Ahmed Mohamed, a forty-something man who also frequencies the tea shop. He has travelled, having lived in Somaliland, London, and Cardiff. "People are going to adopt the culture of the country they're living in anyway. So why not help encourage our youth to appreciate where they've come from as well."

Meanwhile, Hassan is comfortable with mixing his two cultures. "I wake up and have some typically British cereal. When I come home at night, I have a typical Somali dinner."