Actress Sonia Rolland was born to a Rwandan mother and French father. The outspoken former beauty queen is also a passionate activist who frequently travels to Africa to help others. 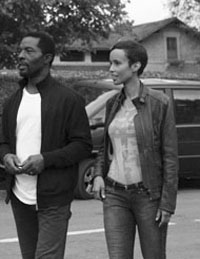 Sonia Rolland, (Miss France 2000), is an actress and model who has been outspoken about racial issues in the film and fashion industries, and in the media. In this exclusive interview she talks about her work, politics and what it means to be "black" in France.

After being Miss France how did you become a successful actress?

It took a lot of work because I had to convince the acting community that a beauty queen could be an actress. I always wanted to act, but becoming Miss France wasn't the right way to pursue that goal. When you've been Miss France you have always that label. Determination and willingness were the keys and today people talk about me as an actress.

When was your first movie?

My first movie was in Cameroon in 2002. It was for the French channel Arte and was called Les Pygmées de Carlo (Pygmies of Carlo). I played Desire, a character who is half French and half Cameroonian. It was a beautiful experience. Shooting in Africa was symbolic because I was born there. I thought I was lucky. The whole thing was a revelation because I was finally doing what I wanted. You have to be determined. Conquering another world it's always complicated. But this is my passion so I always keep my head up. This industry is designed to destabilize you, but I come from Rwanda and before becoming Miss France I was Miss Bourgogne (a region of France). I've already proved that nothing can hurt me.

How did you get your role in Lea Parker the hit French TV series?

In 2002 or 2003, Les Pygmées de Carlo (Pygmies of Carlo) was shown at a TV and film festival and Jean Benoît, the young producer from Lea Parker was there. He was casting for the show and asked if I would be interested. I auditioned six times and he hired me. We did 50 episodes and the first season was a big success. Miss France brought me a title but Lea Parker brought me recognition and a name as an actress.

Do you think you would have more roles in if you were not black or a woman?

It's not clear-cut when you are mixed race because they don't know where to put you. If I was totally black I would be put in that category, but I'm mixed, so that's another thing for them to deal with. However, I was Miss France. Though advantages can mean more difficulties, but that doesn't stop me. It makes me stronger. I've done many projects including Desordres, (her new film) and this summer I'll be in Michigan shooting a movie called "Radio Days" where I play a French Senegalese woman, then I'll appear in French filmmaker Tavernier's movie Quai D'Orsay. I also do the Mixa commercial on TV, which gives me permanent visibility.

So you want to direct?

I'd love to. That's why I plan direct a short movie Ordinary Life this spring. It is the story of two teenage girls who live alone. It's a movie about society that I will shoot in Bourgogne.

I understand that you are very involved in community activism

Yes. Since 2001, I've worked with "Maïsha Africa," a non-profit association to help young victims of the Rwandan genocide. We're proud because we recently helped to rebuild a village with 16 houses, running water, indoor bathrooms and electricity. We plan to expand a school in Nyamata for our latest project. The city is well known because 2000 people were killed in a church there. We need more money to do the work.

How many times a year are you in Africa working on these projects?

I go to Rwanda every two years. This year I'll be there in June or September. As for the rest of Africa it depends. I've been to Cameroon, Senegal, Côte D'Ivoire, West Africa and Algeria, Morocco and even Libya in 2001.

Let's go back to the film industry, how did you react when Omar Sy won the Cesar award for best actor for Intouchables?

I was very happy, not just because he is black, but because he is my friend. His winning symbolizes this generation. It's a victory over life. He fought to be where he is. I just hope it won't be a one off. There are more black actors out there such as Aïssa Maïga, Fatou N'Diaye etc., who are French and represent the face of modern day France.

The Miss Black France contest last year was controversial. What did you think of it?

I'm not against it. Having a Miss Black France is not a problem. It's a good thing if girls who would be and invisible at the Miss France contest are highlighted in Miss Black France. We must stop lying. Every Miss France has been mixed race or white, which works for the majority of French people. The real problem is people don't want to face reality. It is more difficult for a woman with dark skin than a mixed race woman. I would be the first person to acknowledge that - my mother is black. She suffered because of her colour. That was another era, I know. And today maybe things are not exactly the same. However, Frederic Royer, who founded the Miss Black France, did so to show that some women still suffer from this stigma. These are girls, who are good looking, but they are black and that's a problem in some competitions. There are some regions in France where this can be complicated. But, we don't have to say hateful things about the contest. I do have a problem with the title, but I guess it's the best way to sell it.