Dennis Owusu-Sem shares his experience, as he gives advice to attendees at a Success Talks Industry Insights event. The entrepreneur is using technology to help young minorities find success. 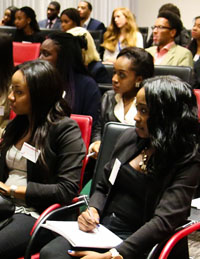 Owusu-Sem, an analyst, wanted to remove barriers that deter young minorities in the UK from being successful. He chose to focus on areas including learning computer coding, entrepreneurship and media using apps as a way to reach his audience. “The world is always evolving and changing which is the main reason that we want to be able to provide the younger generation with these skills,” Owusu-Sem said.

The organization attaches great importance to the concept “Do more with less.” Owusu-Sem explained, “From my perspective, I think we try to do everything to the highest quality. And that doesn’t necessarily mean you have to have a lot of money. We just utilize all our resources properly to make sure when we do things; we do them to the best of our ability. That’s pretty much what it means.”

Doing just that Owusu-Sem has attracted some of the UK’s top professionals from all walks of life to assist in his cause. They include former corporate CEO Damon Buffini, Olympic gold medalist Christine Ohuruogu and orthopedic surgeon Samatha Tross, all of whom have spoken at the organization’s events.

PricewaterhouseCoopers, commonly known as PwC, a multinational professional services network, joined with Success Talks because of Sem’s methodology. Partner Paul Cleal said; “I believe this approach will be successful in engaging young people, because it has a good medium (the app) and a good message - I like the way he uses people from very different backgrounds to talk about where they came from and their journey to success, rather than simply where they are now. This helps people understand that successful people are just like them.” Cleal was pleased about some recent workshops and events; “We had a room full of people with lots of questions about what careers are like at PwC.”

Owusu-Sem who was born in London of Ghanaian parents, has a background in education, creating GCSE notes. He recalls that founding Success Talks UK was inspired by his passion for his role as president of the African-Caribbean Society at the University of Bath and for creating computer apps.

Technology is at the center of the organization’s educational efforts and participants are encouraged to be innovative. “When you stop innovating, others catch you up and you can get left behind. We have to stay relevant and useful to the people we want to attract,” Owusu-Sem emphasized.

Owusu-Sem has used personal networks to fund the non-profit’s operation, using its flagship events to draw the attention of a wider audience and to promote its cause and services.

Many have come in contact with Success Talks through word of mouth or advertisement. “The first time I heard about Success Talks was when I went to an Oxford University conference by their African and Caribbean Society, and Success Talks advertised their organization and one of their insight workshop there,” student Liberty Martin said. Martin was a participant at the organization’s maiden event, a pitch camp, where young participants were taught how to become better public speakers. Mohammed Hammeda who also took part contacted Owusu-Sem after finding out about the free workshop. “We were afforded with the opportunity to speak in front of a lot of people, so we increase our confidence,” he said.

With already several well-attended events under its belt, Success Talks UK’s has big plans for the future. Owusu-Sem said he would like his organization to be global in five years; “And by global I mean I want us to become a one stop shop, where we can gather speakers from different ethnic backgrounds and from all over the world.”

Owusu-Sem is also working on a program, called Internship’s Insight event, where professionals who have overcome adversity to become successful share their respective experiences with the younger generation.

“This will enable the younger generation to realize, that even though they come from a challenging background, people have become triumphant and successful, without necessarily being a member of a well-to-do family or graduating from a higher learning institution,” Owusu-Sem said.

Mirchaye Sahlu is an intern from the University of the District of Columbia’s Mass Media program.